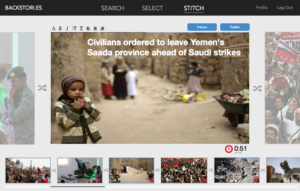 The backstories behind breaking news can be complex, and incredibly difficult to understand if you haven’t been following a story all along. Fortunately, some smart people in television have been thinking about this problem: they’ve created the recap sequence (think “Previously on…”). It helps you get up to speed on the facts so you can jump in to a new episode. Explainer stories are the news equivalent to “Previously On…”; they are comprehensive, evergreen, and search-optimized, but they’re focused on seekers (rather than casual browsers), difficult to make, and are quickly out of date in situations that are changing frequently. How could you make a quick, flexible recap sequence for news without having to create new content?

Inspired by TV recap sequences, Backstories remixes structured data from previous stories (leveraging your archive) to create an explainer video for a reader to get up to speed. Backstories videos are composed of headlines and key images from previous stories, and background music. The videos are automatically generated, but journalists can fine-tune the content to make it more coherent.

Backstories was created for Ethan Zuckerman’s Future of News and Participatory Media class at the MIT Media Lab, and has been featured on Nieman Lab and the AIR newsletter. The prototype runs on Flask and the code is available on GitHub.