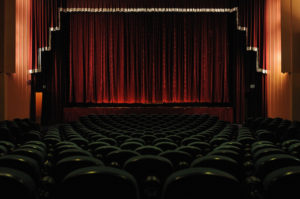 Controlled chaos: As journalism and documentary film converge in digital, what lessons can they share?
Old and new media types from journalism, documentary, and technology backgrounds gathered at MIT to share practices and discuss mutual concerns.

Documentary film and journalism are, in many ways, rooted in the same traditions. Though focus on narrative often differentiates film from traditional journalism, it helps to remember that the earliest films were straightforward recordings of real life, such as trains pulling into stations

Today, more and more documentaries are finding news publishers to be the ideal platforms for their work — especially interactive documentaries, like those mapped by Docubase. Meanwhile, journalism schools increasingly offer courses in software development and multimedia production. As both practices migrate into the digital space, they have a lot to learn from one another.

To further explore this convergence, earlier this month MIT’s Open Documentary Lab and the MacArthur Foundation hosted a daylong event called “The New Reality.” ((Disclosure: I’m a graduate student in MIT’s Comparative Media Studies program, which houses the Open Documentary Lab.)) Participants represented old stalwarts with large audiences like The New York Times, The Guardian, and Frontline, younger upstarts like Vox and Storyful, documentary fixtures from Tribeca and Sundance, and a range of academics studying digital journalism and interactive media. The goal was to explore the synergies and fissures at the crossroads of interactive documentary and digital journalism; here’s a brief overview of what was discussed, what remains unsolved, and what went unsaid.

The forms and platforms are converging

Journalists and filmmakers are increasingly using the same tools to tell stories, and they’re releasing them on the same platforms. Two panels at “The New Reality” — “Documentary Forms and Processes” and “Technologies in a Changing Media Landscape” — focused on these issues. Recurring examples of this technical merging were the many docs released by news entities, such as Katerina Cizek’s Highrise project produced by the National Film Board of Canada and published with the Times.

News organizations already have a built-in audience with stakes in social issues, an ideal springboard for a documentary filmmaker. In addition, entities like the Times and the Guardian have rich archives and technological firepower, allowing filmmakers to continue to push the boundaries of their form.

'Tech & journalism ran into each other in abt 2000. Since then it's been exciting, loosely controlled chaos' @gabrieldance at #MITNewReality

At the outset, Frontline’s Raney Aronson, a panelist, asked when a documentary should be interactive instead of linear. Panelists explored the tension between immersion and play, and the balance of experimentation with cohesion; web-native documentaries can take endless forms, each with endless capacity, but nobody wants to see a sprawling, sloppy product. The interactive form often requires the viewer to be an active and interested participant in the topic.

Cizek mentioned her favorite line, “I came for the technology, I stayed for the story,” but many storytellers are looking for a broader audience than activists and doc enthusiasts.

The unique form of each interactive doc also makes critical comparison and audience literacy difficult. Most agreed that projects should start with the story and build the form around it, but templates can serve as shortcuts to start developing a language for interactive features. Gabriel Dance of The Marshall Project called each story “a beautiful delicate flower…there is no template, there is no tool,” and AIR’s Sue Schardt stressed that it’s important to find the language before the funding models.

But too much experimentation may also keep the field from legitimizing. Some documentaries, like 18 Days in Egypt or Rachel Falcone and Michael Premo‘s Sandy Storyline, are about process and participation too; how can we judge these works critically? How will they be assessed for potential funding? And do they have a place in the newsroom, as CUNY’s new social journalism master’s degree might suggest?

There was also more practical discussion around technologies and platforms, and the challenge of balancing readymade templates and customized tools and code. Standardizing forms would also mean standardizing technologies and frameworks, which would streamline the process and reduce costs, but risk some of the creative experimentation. For now, storytellers are limited by the small screens of mobile devices and minimal capacity for interaction; the most exciting content-sharing platforms are too complex for mass audiences and commercial viability. Having conceded to Facebook and YouTube as the primary interaction and communication platforms, the trick might be to build tools that creatively remix them, though APIs may be unstable and engineers would end up taking on editorial responsibilities.

Audiences, participants, and publics are in transition

Journalists and documentarians have always cared about the impact of their work, but now they can see, measure, and interact with it. Digital metrics have changed what constitutes a successful project, which increasingly contributes to choices made by the creators (and some argued that it certainly should). Moreover, the web has created new opportunities for crowdsourced and participatory works — journalists use their audience to land scoops, source data, and fund projects. At MIT, the depth of potential audience interaction was discussed on panels such as “Rethinking Participation: What Can We Learn from Documentaries?” and “Audience Engagement & Impact.”

But “the audience” and “the public” are two very different groups, as the Times’ Lexi Mainland pointed out. Times readers represent a limited demographic, and will only be able to contribute to a small subset of the paper’s journalism; this is even more true for the niche audiences at small startups and trade journals. Tapping into the web’s communication channels without falling into the audience bubble will be crucial as storytellers hunt for stories worth telling, and presenting them compellingly.

Some panelists claimed to have a clear picture of their audience, but none have a solid grasp on impact. This is unsurprising, given that even the audience turns out to be slippery — public institutions are there to serve the public, of course, but their viewership and donors must be a priority. Older demographics still reach for TV and traditional forms, while digital and interactive viewers will skew younger. We can measure some behaviors, but they’re continuously shifting. For example, panelist Kamal Sinclair of Sundance pointed out that, while nobody expected millennials to sit and watch a 45-minute video on mobile, Vice has proven that they will.

What does that mean for the definition of a “successful” video project, as compared to a few years ago? Panelist and Rutgers professor Philip Napoli suggested that time spent was a dangerous measure of quality, too, calling attention “the last bottleneck” for the media world. There was general agreement that while metrics for documentary skew towards qualitative and personal impact measurement, journalism skews more towards the quantitative and aggregative. A blurring of these lines seems healthy as the forms collide.

Another concern around audience was the necessity of closing the feedback loop with creators. Participant and USC professor Henry Jenkins championed networked “circulation” over traditional top-down “distribution,” saying it would afford a better afterlife to projects and inform newsroom processes and practices.

Finally, a panel called “Journalistic Standards in Transition” focused on the balance between aesthetics and ethics in documentary and in journalism. For better or worse, journalism is a more codified institution than documentary, with its own degrees and standards about what journalism “is” or should be. Documentary is a more ramshackle affair, with its share of festivals and awards but less unified and established conventions.

The panel started with Aronson asking panelists to define journalism, which set the tone for complex questions: how do you deal with bias or media with an agenda, like an ISIS propaganda video? How many cameras need to be present to “verify” an event? Is it wrong for journalists to manipulate footage, even to add sound effects or music?

The current trend towards advocacy journalism can borrow ideas from documentary, but Jason Spingarn-Koff of the Times’ Op-Docs reiterated the need for fact-checking in order to maintain journalistic rigor. “We shouldn’t make everyone adhere to being journalists, but we do have journalistic standards at the Times,” he says.

"It's amazing what documentary filmmakers will try to pass off as truth." @jskoff on bringing Op-Docs to NYT #MITnewreality

But outside the Times, the line grows ever blurrier — there is no journalism, only “acts of journalism,” as Jeff Howe said, reiterating a line of Jay Rosen’s. Some journalistic outfits, like the Center for Investigative Reporting, are making graphic novels and rap videos; Ariane Wu asked when this stopped being journalism and became something more like art. On the one hand, this is a question of semantics, but on the other hand, the question has major consequences for how nonfiction video and interactive projects get made, structured and funded.

Another major difference is that, while docs can take years to create, news is inherently fast-paced. Longform works emerge between these time scales, of course, and can be crucial for bringing the public’s attention to complex story arcs; this type of storytelling helps the audience place newsworthy events in the context of larger historical phenomena. Interactive features might have form and marketing challenges, but they can play a crucial role in balancing the time scale of the news cycle.

What’s next — and what’s missing

While a few participants expressed relief at avoiding state-of-the-industry and revenue model discussions, such conversation was sometimes unavoidable. Beyond lamenting the lack of platform innovation in a crowded market, Larry Birnbaum of Narrative Science reminded attendees that advertisers lurk just around the corner of every new media innovation: there are people with much more money and much clearer goals who are eager for these tools and forms to be developed.

Looking further into the future, new platforms will mean new responsibilities for storytellers. Oculus Rift was cited as an example of a technology that raises the stakes, as do 3-D and tactile media. These platforms, like any others, have the potential to manipulate viewers and spread propaganda, but Birnbaum suggested that while computers can provide us with live data, immersive graphics and interactivity, they are still very far away from the higher-level field of complex storytelling.

Overall, “storytelling” was the word of the day. Participants preferred to self-identify as “storytellers” and “story-makers” rather than the platform-stereotyped “journalist” or “filmmaker.” It’s also telling that while everyone wants to be a storyteller, no one wants to be maligned as a “content creator.”

On the other end of the spectrum, Cizek spoke of “the people formerly known as subjects,” a phrase that resonated with many. I can’t help but wonder, though, whether we haven’t replaced “subjects” with “users,” a term that comes from the tech industry, which has fashioned better techniques for understanding its audience than the journalism or media industries. There could have been, I think, more discussion of these terms and who owns their histories.

Caught between advertisers and aggregators, journalists are not as in control of their message as much as storytellers typically like to be. In the age of the attention economy, gaining eyeballs often means producing work that triggers an emotional response, new ground for traditionalists. Is this journalism or documentary? Birnbaum, and others, called it loosely controlled chaos.

Photo by Michael Saechang used under a Creative Commons license.